An eerie silence falls over me as I waltz through the iron gates of the Lowell Cemetery. As I enter the land of the dead, a horde of statues lay their stony gaze upon me. Cemeteries always unsettle me, to be standing inches above the dead, feeling as if they could reach up and grab me by the ankle. Despite the discomfort around my feet, I keep my eyes keen and spot an intricate tombstone raised on a platform. It looks like a small church with ornate stonework that twirls up the four pillars ending with a cross atop. Between the pillars stands a robed figure of short stature. The little curly haired statue leans on the side of the structure, looking only slightly tired from standing in the same spot for decades. The whole display exudes a certain mystique as it is enshrouded by shade.

The light through the trees guides my gaze to a tomb that read “PARKER” across the top. The vibrant blues and yellows at the bottom of the structure’s copper door fade into a deep green. The staggered beams of light give an ironic life to the motionless stone figures engraved into the wall. 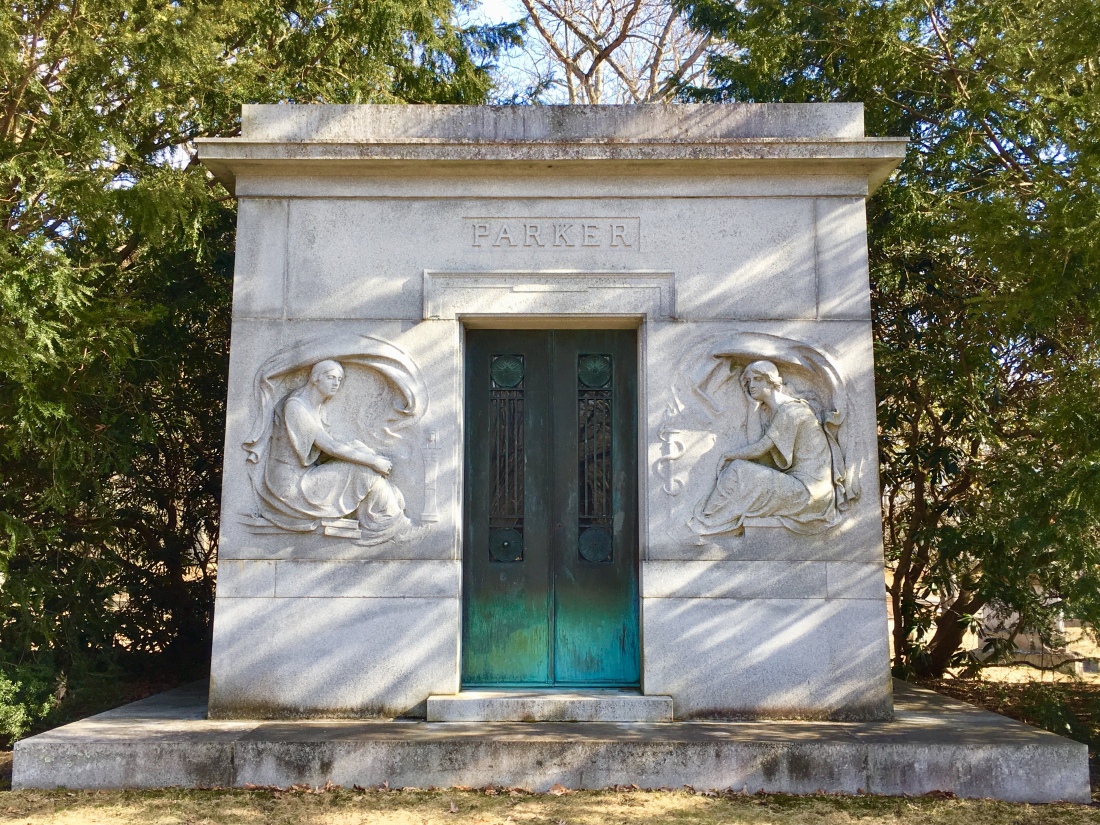 I follow the sun’s lead past the trees, until an imposing building blocks the light from my view. I stand in its shadow and notice that the building is hollow. With a faint light coming through the back window and the partially covered glass front door. Curious to know what is inside, I step closer and see two small holes in the thick glass that look like they were made by a bullet. I chuckle to myself at the pointless act of shooting at a dead person. I will always wonder what the true story is behind these holes, just one of the many stories lost to the past within the cemetery. 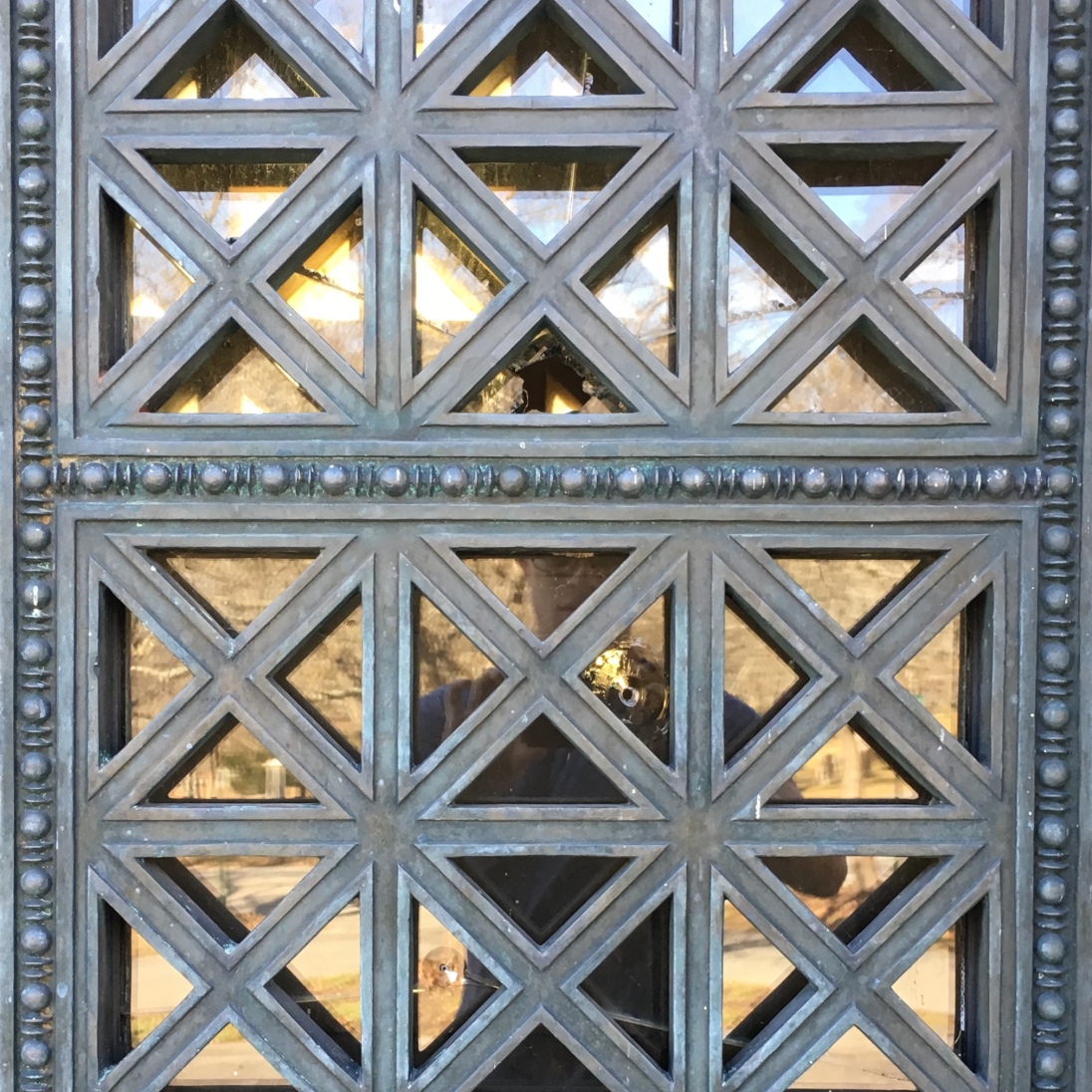 The rolling green hills dotted with trees and headstones surprise me with their expansiveness. I can’t even see through to the other end of the cemetery. So many generations of families lining the gravel path’s that snaked throughout the acres of land. The size of the headstone’s varying greatly depending on the position in life that the deceased individual held.

I walk by a family, David, Maria, and a third name too faded from age to be legible. Their names scrawled on tiny but beautiful headstones, all three together in life and in death. It was a comforting sight for me, helping distracting from the dreadful feeling that the place gives me. One cannot be surrounded by so much death and not consider their own mortality. To be as young as myself, it’s hard to grasp that I will someday end up in the same place as these others underfoot. I’m so far from where they are and yet in this moment I am so close to them. Unlike me, many here have been long forgotten, receiving at most a brief glance from the occasional passerby.

The Lowell Cemetery was established in 1841 at a time when there were no parks in the city. Modeled after the first garden cemetery in America: Mt. Auburn Cemetery, which was built a few years earlier in Cambridge (Durno). Offering a visual break from the industrial streets of Lowell, it stands as the most aesthetically beautiful area of Lowell that I have visited. Somewhere to mourn the dead in peace, surrounded by bountiful green space and the constant hum of song birds. The beauty of the scenery has been masterfully preserved over the years, earning its title as a “garden cemetery”.

Walking through the cemetery tells the story of the city through the many notable Lowellians buried within its hallowed grounds. It was placed in the National Register of Historic places for this vert reason. From Henry Livermore Abbott, a Brevet Brigadier General in the Union Army during the civil war, to United States Senator Paul Tsongas. An abundance of important people were laid to rest here. Even Augustin Thompson, the inventor of the divisive soft drink Moxie lies in the cemetery. There is a military memorial surrounded by four cannons, with an American flag waving proudly in front. John C McFarland a proud recipient of the medal of honor lies in the back left of the row of headstones. Lined up in an orderly fashion, just as they had stood during their time in the military. So many different eras of Lowell are represented by those that lie in rest here. 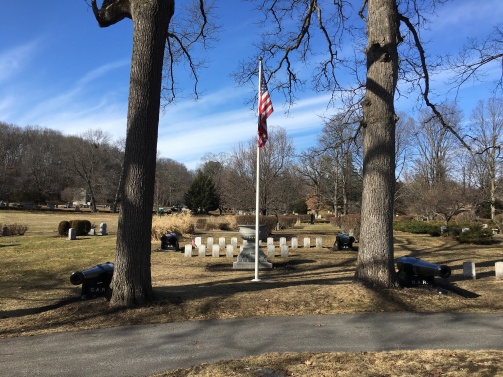 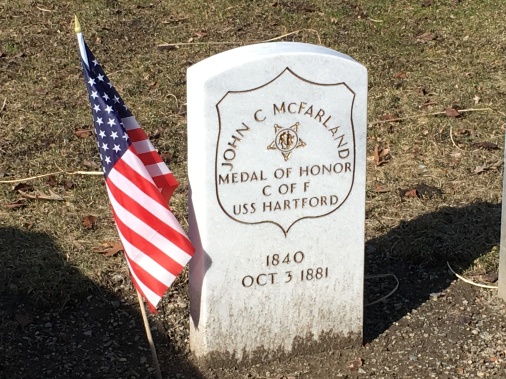 Up ahead I notice an ominous structure, a solid mass of stone held up by two pillars. In front of it, a green statue of a woman stands stained in black from years of wear. Her arms outstretched with her fists clutching a large veil. Her blouse scandalously falling down her chest as she turns her gaze upwards. Just as I was starting to feel more comfortable during my peaceful walk, I lock eyes with the statue. Her eyes are as striking as they are terrifying, two penetrating black holes where her pupils should be. In front of her lay some small items and a fittingly dead flower resting in its pot. As I go in closer to investigate the items in front of the statue, I see what I can only assume is her name written on the stone below her: “BONNEY”.

She is known as “The Witch Bonney” to many wary locals. According to legend, her dress gets lower and lower beginning each October until on Halloween her breasts become fully exposed and the witch returns to get revenge on the descendants of those who wronged her. She is supposedly reborn in the hollows of old tress, so the groundskeepers make sure to cut down any dead trees that appear in the cemetery (Hider). The trinkets and flowers that I see in front of the statue, are offerings left during Wiccan rituals that take place here every Halloween. Anyone who takes any of these offerings away from the statue will become cursed with bad luck. To protect her a massive white marble lion sculpture sits right in her gaze (Ugc).

Historians are very skeptical however, that the statue was constructed as a memorial to a witch who was hanged during the Salem Witch Trials. Clara Bonney Lilley died at the age of 39 during childbirth sometime in the 1800s and her father was a judge. Nothing seems to point to the idea that she is a witch, besides the horrifying statue that represents her. Despite this, many locals still believe in the legends, and many paranormal investigators claim that EMF detectors go haywire when they are placed near the statue (Hider). At the very least it gives some extra edge to this otherwise pleasant cemetery.

I waltz back out of the gates, feeling just as unsettled as when I first entered. While I can appreciate the beauty of the cemetery, it was relieving to be away from Bonney’s cold gaze. It is surreal to see every Lowellian since 1841, frozen in time together. The people that lie inside of these iron gates, made Lowell what it is today, for better or for worse. It lies sadly out of sight to the rest of the city, miles away from the university campus. I spoke to one of my Father’s Coworkers who lives in Lowell on how they felt about the cemetery. “I went there once and it was a very beautiful, one of the nicest I’ve seen around. My family was the first of my relatives to move into Lowell, so I don’t have any ancestors in the cemetery as far as I know,” not giving her much sentimental reason to visit. When I ask her about the witch Bonney she says “I remember as a kid hearing stories about the witch but I never believed them. Kids always like lots of dumb stuff like that.” I guess not everyone is as afraid of Bonney as I am. I really believe it is worth the trip down to the cemetery, just to get away from the frantic bustle of the city. A haven of peace and silence inside of the industrious Mill City, just be careful not to get cursed by the witch.

Thanks for joining me!